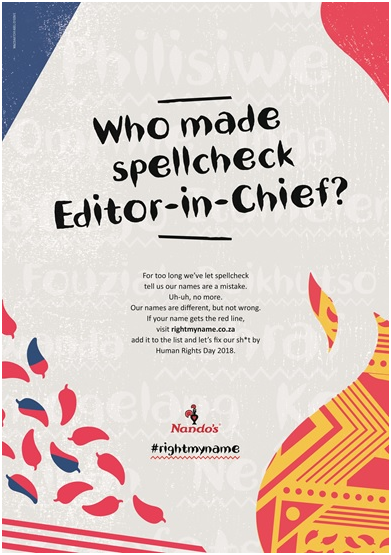 Johannesburg, 12 March 2018:  This past weekend, Nando’s partnered exclusively with the Sunday Times, SA’s best-selling weekend newspaper, to promote the #rightmyname campaign which aims to correct the exclusion millions of South Africans feel when their names are reflected as errors by spellcheck.

With Sunday Times readership in excess of 2 million people, and reach that extends widely across race, age, income and gender demographics, the Nando’s #rightmyname campaign has gained broad and effective exposure.

“At Nando’s, we’ve always loved celebrating South Africa’s diversity. So when we noticed that after more than 30 years, spellcheck still highlights Nando’s as a mistake, it got us thinking. What about other names in South Africa? Names like Nokuthula, Elodie, Darawees and Tebatso. Why are their names highlighted as mistakes too? Not cool,” says Doug Place, Chief Marketing Officer.

#rightmyname encourages South Africans to go online and register their names on www.rightmyname.co.za as soon as possible. The website promises that on 21 March this year – Human Rights Day – South Africans will “be able to update your spellcheck dictionary and get rid of the red line beneath your name – and the names of all your friends and family too.”

Sunday Times editor Bongani Siqoko is one of those victims affected by spellcheck discrimination, and believes enough is enough. “I’m looking forward to a day when the emails I send and receive are no longer tarnished by that discriminatory red squiggle.  As an editor, there is only so much squiggling one can tolerate on a screen, before seeing red.”

Reardon Sanderson, GM Sales & Marketing at Tiso Blackstar similarly suffers the red-squiggle blues. “Spellcheck shows a broader ignorance of diversity by those who create the technology.  We’re therefore thrilled to support Nando’s and be part of the solution where all our names are given the respect they deserve. I feel very hopeful and fired up,” he concludes.